As the old adage goes, “markets climb a wall of worry”, so in good fashion BAML tapped into its inner Trump in its weekly market review to make certain sure that investors have a wall!

While the US Federal Reserve tries to atleast stabilize its debt to GDP ratio – something it has been doing by increasing interest rates and trimming its balance sheet to the tune of $50B a month recently (to the chagrin of most investors in Q4 2018), China continues on its debt rampage. The US debt to GDP ratio sits around 105%, near its alltime high set in 1946 due to its war efforts in Europe. China’s debt is now over 250% of its GDP and its not stabilizing. 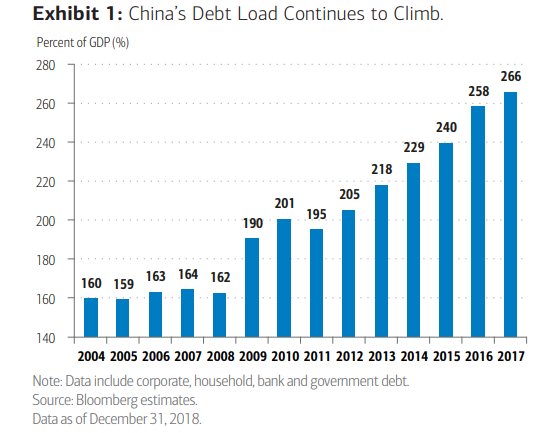 The amount of debt issued as leveraged loans is now bursting at the seams. BAML says its now more than $1 trillion, oustizing high yield debt already.

So much easy money has created some interesting creatures in the private equity world. BAML notes:

“Easy availability of capital has led to a boom in the growth of
private companies and their valuations, with many now valued
at over $1B, claiming the name “unicorn.” Total U.S. unicorn
valuations have risen from $62B in 2013 to $493B last year,
with 180 new unicorns being created along the way, according
to PitchBook”

Although our clients like many retail investors may have never heard of leveraged loans, that does not mean they are not at risk. Banks do not own these loans outright, but instead buy them as collateralized loan obiligations. BAML probably has some experience with identifying CLOs as they are simlar to the infamous collateralized debt obiligations that brought down Lehman Brothers and forced Merrill Lynch into Bank of America’s hands in 2007.

Bluntly put, no matter what others are saying, watch out if you own bonds with less than investment grade rating. Risk to maturity is probably mispriced right now. JNK and HYG ETFs are bouncing back now with the equities markets. Using this as a good time to lighten up on the risky end of the bond spectrum seems a good idea.