All the major equity markets saw extended bullish action from December lows. This continued through most of January, with only the last few days showing some weakness. The strength of the SPY really picked up in the second half of the month. The end of the month selling was weakest in the SPY.

Mid-Cap US stocks (MDY) showed similar strength from early December through the first 3 weeks of January, but the last two days of trading gave back a large portion of those gains.

Small-Cap US equities (IWM) also gained January but lost even more than the SPY and MDY during the last days of trading. All US indices traded far above both their 50-day and 200-day moving averages again, making them susceptible for a short-term correction.

In the US, consumer discretionary stocks outperformed all other stocks, followed closely by healthcare. Utilities and real estate investment trusts continued to underperform. 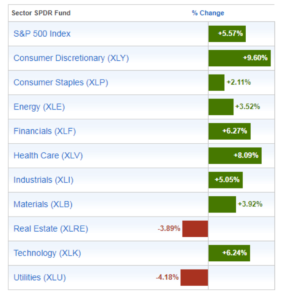 Non-US equity markets did well also. They travelled in sync with their US counterparts and ended January very extended above their long-term moving averages. Again, these VEU and VWO sold off like US stocks in the last few days of the month.

Real estate stocks – represented by the ETF RWO – continually created 3 lower highs from mid-December. The 50-day moving average is flattening and has not offered any support to RWO. With continual oversupply of commercial real estate in the US and Europe, this ETF is likely to continue to stay under pressure. Increasing interest rates will further create problems for this sector also.

HAP – a proxy for natural resource companies – performed like other equities.

Commodity prices consolidated their December gains in the first half of January, then rose again from mid-month. Again, a few days of losses at the end of the month, tarnished USCI its bullish performance.

US Bonds began to fall apart after interest rate increase became more a certainty in January. Again, three times AGG made lower highs. It finally broke down below its longer term moving averages, and looks to fall further.

With a lack of real inflation in the US and the threat of increasing interest rates, TIPs have suffered. The 200-day moving average is at least acting as some support in the end of January.

The USD continues its weakness against others currencies as UUP suffered a major sell off in January. The 50-day moving average acted as a strong level of resistance in mid-December. Interest rate increases could help strengthen the dollar in the future.