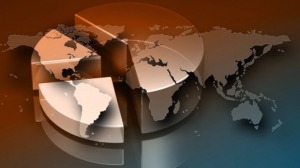 A weak China ISM number along with some negative reactions out of the emerging markets – caused from the winding down of QE – spooked the US stock market and triggered two strong DOWN days. Time will tell if the pullback turns into a full fledged correction, which is usually classified as a decline of 10% or more. It’s never a matter of “if” we’ll have a pull-back or correction, but “when” we’ll have one, and doing our best to avoid them. Moreover, once a pullback or correction begins, we leverage our data to predict how deep it will be before finding support. Even after watching charts each week, it’s still very difficult to predict when a sudden sell-off will hit and what will trigger it.

Prior to last Thursday and Friday’s sell-off, just about all of the data was pointing to a market that would most likely continue to trade sideways and choppy as investors digest earnings data, and await remarks from this Wed’s FOMC meeting. Moreover, valuation of stocks were fairly, but fully valued at 15.4 times earnings, the macro economic data was relatively strong, market breadth was holding steady, and Q4 corporate earnings results were okay.

Additionally, prior to last week’s sell-off, the relatively strong fundamental and technical data told us that if we did have a pull-back there was a reasonable probability that the major indices would find support at a major support level near or just below the 50 day SMA. The status quo over the last 15 months was that every pullback was shallow, declining 2% to 4%, stocks would find support near or just below the 50 day SMA, bounce, and then continue to trend higher. So, is this pullback going to be the same? Or will it be different this time and turn into a full fledged correction?

When asking the question “is this pullback going to be different this time and turn into a deeper correction?”, we need to ask ourselves “what is different today as compared to early last week before the sell-off?”.

One thing that is different as compared to last week before the sell-off is that the Fed is tapering bond purchases by $10 billion after each Fed meeting, with the goal of winding down QE by the end of 2014.

The final thing that is different this week versus early last week is that cash has been flowing out of the Emerging Markets over the last 6 weeks – caused from the winding down of QE – and this now is impacting foreign currencies.

Let’s address each change mentioned above:

In summary from our analysis above, the artificial floor propping up stocks will soon be eliminated from the termination of QE, so the market will begin to behave in a more “normal” fashion. i.e. when we have sell-offs, volatility will spike higher, most major indexes could pierce down through the 50 day SMA before finding support, and some indexes could pullback to the 200 day SMA. Thus, there is a higher probability that this current pull-back could turn into a full-fledged correction and drive the major indices down to the 200 day SMA, so we need to be prepared for this.

A poor China ISM number and volatile currency fluctuations in some emerging markets, like Argentina, spooked the US markets and triggered a sell-off. Because the Fed is now tapering QE, there is a reasonable probability that the major indices will pull back farther, possibly down to the 200 day SMAs before this correction is over. Earnings season is picking up steam and the results so far are okay. Investors/traders are now waiting to hear from Janet Yellen, the new Fed Chief, on her plans with QE and the pace of the taper. On the positive for Janet Yellen, she is dovish and the stock market likes this. For specific sectors, financials (XLF), consumer discretionary (XLY), industrials (XLI), transports (IYT), semiconductor (SOX), and the equal weight tech stocks (MTK), the UP trends are under pressure.

On the negative, retailers (XRT) has weakened a lot over the last few weeks. Most of the charts around the globe are looking okay, so globally the coast is clear for the next few weeks, but we need to monitor them closely. Back to the US, oil and gasoline prices have been low over the last few months, which has boosted consumer spending and this is constructive for equities. The bond indicators are pointing to a stock market that will be under pressure for the next few weeks. The macroeconomic data over the last 90 days has been good, other than the bad non-farm payrolls report a 3 weeks ago. The S&P 500 forward looking P/E multiple is 15.1, which is above the 10 year average of 14.0, but currently it’s not classified as excessive. The market breadth indicators recently weakened after last week’s sell-off, pointing to a market that will most likely trade sideways to lower over the next one to two weeks.

Prediction of where the stock market is heading over the next one to two weeks: The stock market will most likely trade choppy on higher volatility, and eventually pull back farther until the Dow touches 15,700 or 15,500, which is just above the 200 day SMA. As mentioned above in our analysis of “what is different today as compared to early last week”, this sell-off could turn into a full-fledged correction since the Fed is now tapering QE. In the short-term, the market is bearish, and it could correct as much as 10%; for the long-term, the market is still in a confirmed UP trend, and most likely money managers will start to buy stocks once the Dow gets near 15,700, and the SPX gets near 1760.