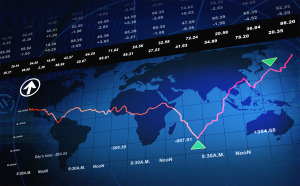 The main US indexes each hit new highs last week and multiple times in February. The broad market will most likely grind higher for another week or two. However, if one or more of the indices break back down below the recent breakout level, this will most likely trigger a 2% to 5% pull back.

The following sectors hit new highs recently: Semiconductor (SOX), Consumer Discretionary (XLY), Retail (XRT), Industrials (XLI) and Technology (XLK). This is bullish for US equities. Financials (XLF) and Transports (IYT) are also acting bullish, but they have not taken new highs. On the negative, Transports (IYT), in general, are under performing and this sector needs to fully participate in this up trend to be deemed “healthy”.

The US economy’s GDP is growing at +2.5%; the labor market is expanding with the January jobs report posting +257k new jobs; interest rates are low; inflation is low; energy costs and other input costs are low; the Federal Reserve is accommodative; companies have a lot of cash on their balance sheets; and the dollar is strong. All of this data is a net positive for US equities. On the negative, US economic data has been softening over the last couple of months.

High yield debt (HYG) was sending a “risk off” signal starting July 2014 as “debt default fear” (mostly from energy/oil companies) could spill over into equities. However, the HYG has stabilized and has been trending higher over the last 4 weeks. Per the 10 year T-bill the yield is back up to 2.0%, telling us that some cash has been flowing out of bonds and back into equities.

Most Eurozone equity markets are showing some strength due to the ECB implementing a round of Quantitative Easing. Greece has successfully negotiated a 4 month extension to their bailout plan, so most of the uncertainty around Greece has subsided.

China and Japan are at 52 week highs, Korea has stabilized, and Taiwan (EWT) is back above its 50 day moving average.

Low oil prices will most likely cause some future damage to certain US companies and oil producing countries that rely on $100 oil, such as Russia and Iran. On the positive, oil prices have stabilized near $50/barrel. There is fear of global deflation and Russia is moving more tanks into the Ukraine and this is causing uncertainty. The above ongoing events will most likely cause periodic shocks in Q1 and Q2 2015 that will increase the market’s volatility.