Merrill Lynch’s CIO sees a positive US market environment underpinned by better valuations and loose monetary policy. Although political global uncertainty and potential volatility continue, a positive shift in the markets is underway. We would say that ML is looking in hindsight, and could miss the fact that February is usually the weakest of the best six months of the year. Worrisome also is that US gains in January were led buy the REIT sector – not a usual outperferming sector in a bullish market.

The CIO of Morgan Stanley sees a ‘soft landing’ for China’s economy once a trade agreement is worked out as domestic demand takes over from state sponsored infrastructure spending. Watch for a low read in China PMIs as indications of the turn. With China A shares selling for less than P/E ratio 10, and the Shanghai Shenzhen CSI 300 Index, which tracks China’s large-cap stocks, down more than 28% in the last 12 months, stocks look cheap. We agree, but still, we think that better opportunities exist in Brazil, Turkey, and Thailand currently. 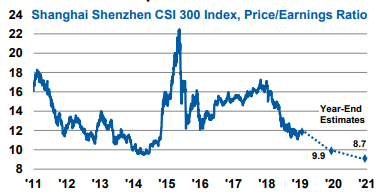 In mid-January, UBS’ CIO tried to answer the question on every investors mind, “Is now the right time to buy equities?” It highlighted three areas that need progress. First, China/US trade talks needed some advancement beyond twitter threats and meetings about meetings. Second, the US government shutdown needed to be resolved. Third, Fed officials – Mr. Powell in particular – needed to bear in mind the Q4 equity and bond market weakness when considering further rate hikes. Only Mr. Powell fully obliged, when he used the word ‘patience’ in his recent post-FMOC meeting wording. A temporary fix for the US government seems to hold for now also. Meanwhile, Mr. Trump is still using his fingers (mostly the middle one) in negotiating with China. One and half out of three seemed enough to keep markets gidddy for January.

J.P. Morgan reminded everyone how miserable it is in Europe, not hardly because of its relationship (or lack thereof) with the ever so fraught UK. Europe underperformed all major markets in January. Italy and Greece are the weak links obviously, but German exports are showing weakness now as well. The UK rebounded after its trouncing in Q4 2018 on higher oil prices. And for that matter, Saudi Arabia and Russia did not do poorly in January either.