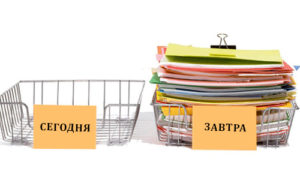 With the start of every new year comes all of those resolutions that you’re absolutely, positively, definitely going to tackle. You’ll finally kick your retirement savings into high gear. And you’re not going to let that financial paperwork pile up again. Yet while you have a game plan for just how to get there in your head, you somehow can’t get your brain to flip the switch to “action.”

Perhaps it’s because you’re not really a procrastinator—you just work best under pressure. Once the 11th hour strikes, the creative juices start flowing, and you can tackle just about anything, right?
Actually, no! We make more errors under pressure. If you are like most people, It’s not that you work better under pressure—you only work under pressure. In other words, you can’t get anything done unless you have a fire lit under you, which is when you start cursing yourself for not having the willpower to start earlier. The good news is that sheer willpower isn’t the whole story when it comes to defeating procrastination. And there are plenty of ways to outsmart yourself, so that you can beat your own tendencies toward procrastination.
In fact, with the help of some behavioral and financial pros, we’ve gathered six strategies that can help you stop delaying the money-related tasks that can enable you to reach your financial goals.

How often have you used the excuse “I just don’t feel like it right now” as the reason to put off tomorrow what you can easily do today?

Let’s face it: You’ll never feel like it. In fact, part of the reason why we keep delaying action is because procrastination is a coping mechanism—it provides a temporary reprieve from an emotionally difficult task.

And if you’re procrastinating about a money-related task, then it might be because sitting down and examining your finances means that you might come face-to-face with realities in your life that may be unpleasant. It requires you to examine the amount of money coming in and going out, and most people can have difficulty doing that.

But if you accept that your motivational state is never going to match the task at hand, you can stop using that as an excuse for procrastination—and, soon enough, you may notice your motivation start to build because you’ve finally kicked off a course of action.

And by getting started, we literally mean just get started—even if only for a few minutes. By minimizing the commitment in your head, you make it much easier to put pen to paper, open your laptop, log into your bank account—whatever the initial step is to tackling that money task you keep putting off.
Often, we spend three days dreading a task that might take 30 minutes. So tell yourself that you’ll do it for just five minutes, and if it’s really that dreadful, you can stop. Once you get started, 99% of the time you’ll realize it’s not so bad. It’s just like exercise. Our discomfort, fear or nervousness is what fuels the belief that tasks like paying bills or checking an investment portfolio are going to be much worse than they actually are.

We assume that if we feel bad about something, that’s because it’s a bad situation. The reality, however, is often very different from perception. And once you start crossing things off your to-do list, it gives you confidence that you can do things you don’t want to do. It’s not going to ruin your whole day, like you imagined. Maybe the thing you dreaded ended up taking just ten minutes.

It happens to the best of us: We set a deadline for ourselves that feels totally doable—only to find that there’s just a few days left to complete the task, and you haven’t even started. So why do we find it so hard to stick to deadlines? The answer may lie in how we categorize time in our minds.

One recent study found that people tend to view the completion of tasks in one of two ways—as either having to happen now or later. The more likely we view the task as happening in the present, the more likely we are to initiate action toward completing it. The problem is we don’t always view our “nows” and “laters” very logically.

Case in point: The researchers tasked two sets of people with opening a savings account, giving everyone a six-month time frame in which to complete the task.

So how do we trick our own brains into overcoming these lapses in logic? Start setting deadlines based on what you consider “present” time, even if it’s sooner than you might actually need. For example, if you want to boost your savings, think about what amount you can stash away this week, versus at the end of the month, that can help you eventually reach your goal.

Sometimes the goals you set for yourself can seem so intimidating or tedious that it feels impossible to even get started. That may be because whatever you’re ultimately trying to achieve feels too vague or big picture. But breaking down your financial goal into action items can help make it feel more concrete and manageable.

If you say to yourself, ‘I’m going to set up a savings account,’ it has no teeth—there’s no action associated with it. If you’re really serious about it, ask yourself, ‘What’s the next action?’. In other words, “opening a savings account” transforms into a series of smaller steps that you tackle in succession: Research your options. Fill out the paperwork. Seed it with a target amount. Decide how much you want automatically transferred on the 15th of every month.

On its own, none of these tasks feels intimidating, and you can set mini deadlines for yourself to take one of these actions every day or every week until you’re finished completing the bigger task at hand. Retirement is another good example of a larger goal that may feel less daunting once it’s broken down into mini-deadlines by years, months or even weeks.

Saying you want a 3 million dollars by retirement can seem like an impossible goal. But if you say, ‘I need $6,000 by next Christmas,’ that’s not so bad.

Usually, making things harder for yourself isn’t something we’d recommend—except when it comes to all the ways you enable your procrastination. If you often find that “just two more minutes” of, say, your favorite TV show usually morphs into two hours, then it’s time for drastic measures. When it comes to money tasks, pinpoint what your biggest barriers are to getting things done—then make it nearly impossible to do those things until you’ve completed your financial to-do.

If you find that when you come home from work, you watch TV rather than deal with your paperwork, hide the remote. Make it more difficult to do what gets in the way. And then say, ‘If I sit down and do X amount of work, I can watch 30 minutes of TV.’ Hint: You may need to enlist the help of a loved one to police your procrastination. Perhaps it’s the person who knows where the remote is hidden, or holds onto your smartphone until you’ve held up your end of the bargain.

Giving yourself small rewards—like that 30 minutes of TV time—can go a long way toward beating procrastination, both in the short term and in the long run. Perhaps that next episode of your favorite drama is your incentive for working an hour on your taxes. Or maybe if you complete three different financial tasks during the week, you can treat yourself to dinner at your favorite restaurant over the weekend. If you’re working toward something that requires more consistent discipline, like putting away money in a savings account each month, try tying your reward to that goal.

For example make bargains with yourself like, ‘If I meet my savings goal this month, I’ll take 5% of that money and treat myself to something I want.’ Or, ‘If I review my investment portfolio this weekend, I’ll reward myself by buying a nice bottle of wine’. Not only will the reward give you something to work toward, it also gives you the positive reinforcement you need to keep doing the small things that could eventually help you reach bigger-picture goals. Bribing yourself can be a long-term solution to deal with procrastination. It’s definitely a step on the road to long-term habit formation.