All the major equity markets saw massive selling in the beginning of February. Correlation between all asset classes rose sharply, as usual during market corrections, making it difficult to find shelter from the retreat. Combined with the unwinding of the short volatility trade which was so popular for the last few years, interest rate fears in the US were the culprit, according to mainstream media. Not surprisingly, equities stabilized much faster than the bond markets.

Medium sized US companies (MDY) suffered as all markets – falling in the first half then recovering to the 50-day moving average and failing again from there.

Small-Cap US equities (IWM) traded the same making a low on February 11th, and recuperating about half the loss through the rest of the month. Again, a failure at he 50-day moving average seems likely.

In the US, energy and real estate stocks collapsed in February, while technology showed the only real strength. 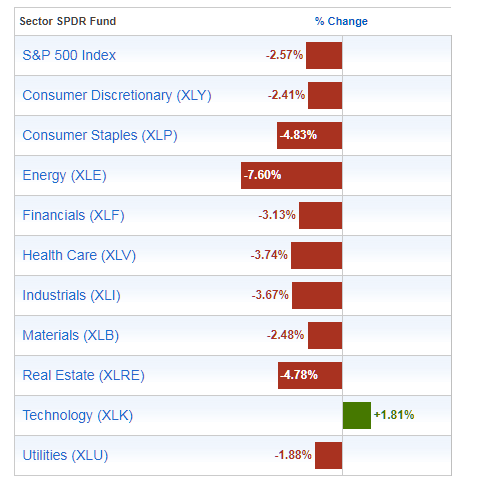 VWO, the emerging markets ETF, traded in a similar fashion also, but it relatively outperformed the US and non-US developed markets. It remains still far a bove its 200-day moving average.

Real estate stocks – represented by the ETF RWO – created 3 lower highs from mid-December, as noted in our January Market Review. This set up for a strong correction in early February. RWO has not been able to comeback from this collapse, and could continue lower is interest rates are going to rise.

After an incredible performance in January, HAP – a proxy for natural resource companies – got crushed with energy stocks being the worst performers in the market. A rebound to the 50-day moving average has failed like the equity markets highlighted above.

Commodity prices sold off their January gains in the first week of February. The relative performance was better than developed market equites, as USCI ended the month still above its 50-day moving average.

US Bonds continued to fall apart after interest rate increase became more a certainty in February. AGG did not start to stabilize until after mid-month, and really never gained any of their losses back. Bonds look very bearish and are not likely to see better times soon with US interest rates likely to rise 3X this year.

Similar to AGG, BNDX fell through the first weeks of February. However, BNDX remained above its 200-day moving average, and bounced higher in the end of the month to retest its 50-day moving average. Non-US bonds are performing better than US bonds, as interest rate increases are not so certain in Europe and Asia.

With a lack of real inflation in the US and the threat of increasing interest rates, TIPs suffered again in February. The market for inflation protection bonds is very limited currently.

The USD strengthened against others currencies after UUP suffered a major sell off in January. The 50-day moving average has acted as a strong level of resistance since mid-December, however, and UUP is currently testing that level again. Interest rate increases could continue to help strengthen the dollar in the future.