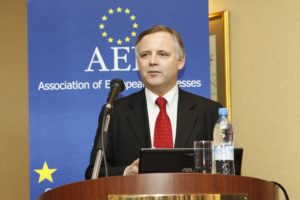 This commentary was posted by our long-time colleague and friend, Chris Weafer (link to http://macro-advisory.com/about/) in an editorial on Dec 22, 2014. Chris worked for several main Russian Banks as the Chief Strategist. He has won recognition as the best Russian Investment Strategist for 2013 by Reuters.

With so many people contacting us over the holidays asking for investment advice on everything from Russian stocks to leveraged Eurobonds, we feel that Chris’s economic forecast for 2015 is timely.

Although not saying so publicly, the Kremlin has adopted a deliberate strategy – to let the rouble continue falling and accept the painful economic consequences over the medium term as the “lesser of two evils.” The weak rouble protects the country’s budget revenues and provides a soft stimulus for domestic manufacturers. It allows the country to survive the crisis but at the expense of growth and investment flows, both of which are being sacrificed over the medium term in order to try and remain in a relatively better shape to recover after the crisis and also to ensure that any loss of public support for the government is contained. As the Kremlin sees it, trying to limit the decline in financial reserves in order to protect the budget, and to preserve the investment grade rating, is a better strategy than burning though the money while oil remains weak.

In a recent press conference, President Putin said he is opposed to the Central Bank (CBR) using any more of the country’s reserves in an effort to defend the currency. I believe this is the correct strategy given the nature of the current crisis. Lawmakers in the Duma continue to call for the dismissal of Elvira Nabiullina, the Chairman of the Central Bank, and for greater support for the rouble. That is a populist short-term measure, which is unsurprising against the backdrop of reports of people having to cancel increasingly unaffordable foreign New Year’s holidays, and the near frenzy of consumers trying to exchange depreciating roubles for almost any expensive goods they can still find.

Russia is right not to use its valuable reserves in this way because that would be a waste and, within six to nine months, the crisis would be a whole lot worse.

So far in 2014 the CBR has burned through almost $90 billion of reserves while the rouble has continued to free fall. By mid-December the currency had lost 84 percent against the US dollar and 60 percent against the Euro. Oil is the key driver and so long as the price of a barrel keeps falling then so too will the rouble no matter what the CBR does and how much it spends. Since October 1st the rouble has fallen 50 percent while the price of a barrel of Urals crude has dropped 45 percent. Trying to preserve the country’s investment grade rating, without which it will be very difficult to attract back foreign investors after this crisis ends, and keeping money in the vault so as to ensure there is no threat of a banking crisis or of a default risk if sanctions remain in place into 2016, is by far the greater priority.

One of the immediate impacts of the falling rouble is that inflation will push much higher in the first few months of 2015, with the headline inflation number expected to hit 14 or 15 percent from 10 percent today. MosPrime (Libor), the CBR’s benchmark interest rate is now at 17 percent, having started the year at only 5.5 percent, and the likelihood is that the rate will go higher still in the next quarter as the CBR tries to tame inflation and provide support for the rouble. Given the President’s objection to any further use of reserves to try and protect the rouble, or any mechanisms, which may be interpreted as a form of capital controls, one of the few strategies left open to the CBR is to continue using interest rates to try and attract support for rouble assets.

What that means is the economy is very likely to fall off a cliff in the 1st and 2nd quarters of 2015. While a GDP contraction of between 3 and 5 percent is probable for the full year (depending on where oil trades) a much steeper fall in the first half is now inevitable. Consumers, especially in Moscow, have been busy taking rouble cash out of ATMs and rushing to buy appliances and other imported goods, which will soon see big price rises or even shortages after the New Year. That will provide a big boost to the retail sector in December but after that, retailing will be a wasteland through the next six months. High prices, high interest rates, and low nominal wage growth makes that a certainly. The high cost of debt will also severely cut capital investment in 2015.

The one compensating factor is that the weak rouble, in the absence of higher oil revenues, continues to protect the budget and will, for example, allow the government to boost pensions and some public sector worker salaries by the rate of inflation in 2015. It will also help boost local demand and growth in the manufacturing sectors. Russian-sourced goods will be cheaper than the increasingly expensive foreign imports. We have already seen that demand shift in the food sector over the past four months.

Import substitution has boosted growth in the manufacturing sector to 3.5 percent this year, and that partially offsets the destruction elsewhere.

Protecting budget revenues, in rouble terms, also means that the government is able to raise payments to pensioners and to most workers paid out of the public purse. That is over 20 percent of the national workforce, and that expands to a much larger share of the population with dependents and extended families. President Putin confirmed in his recent press conference that pensions will rise in line with the headline rate of inflation in 2015, and I expect the majority of public sector workers will get the same. This would not be possible if the rouble had been supported at a higher level against the US dollar as the federal budget would be facing a very large deficit in 2015 instead of a relatively modest hit.