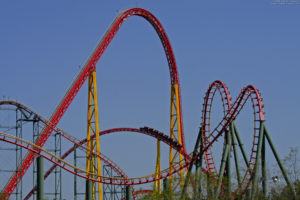 In stocks, volatility is back. The Standard & Poor’s 500 Index, which never went more than three days without a gain in 2014, has twice fallen five straight times since January. Daily equity moves exceeding 1 percent have jumped 50 percent from last year and shares tumbled 3 percent or more over four different stretches in the first quarter.

What seems like chaos is really just a return to normalcy at the end of US Fed stimulus, which is long overdue in a market that has tripled since 2009. Volatility indicators bear a resemblance to 2007, the final year of the previous bull market — which this one now exceeds by 12 months.For many investors, particularly those that haven’t seen a period of time like this, it does create queasiness. The market hasn’t been this turbulent since the European debt crisis three years ago as volatility in currency and energy markets spill over to equities and Fed policy makers signal a rate increase by mid-year.

The market today is showing this is going to a more volatile year and investors should be positioned. Calm is evaporating just as stocks seemed back on track, with the Nasdaq Composite Index above 5,000 and the S&P 500 at an all-time high at the start of the month. The S&P 500 fell 1.4 percent on March 6 after a surge in hiring fueled speculation the Fed may accelerate its tightening schedule.

Rising volatility has coincided with 10 out of the past 13 market peaks since 1946. In 2007, when the S&P 500 climbed to a record in October, the average daily move widened to 0.72 percent from 0.47 percent a year ago. As concern over subprime mortgage contagion and hedge fund losses exacerbated selling, the number of days with the index swinging at least 2 percent surged to 17 from 2.

We note that the parallel between now and 2007 exist. This is a snowball effect. When risk begins to rise, it’s self- perpetuating. Not to call a market crash today, but this is a period to be more defensive.

First Hike
Volatility is poised to rise further, according to our colleague Sam Stovall from S&P Capital IQ. He studied stock performance during the last 16 tightening cycles and found that 13 of them were preceded by equity losses over the six months before the first rate hike. On those occasions, the S&P 500 fell a median 10 percent from peak to trough.

Fed policy makers removed the pledge to be “patient” in deciding when to begin raising interest rates in their recent meeting. Options traders are hedging further increases in the major indexes (SPX, NDX, RUT) with the bull market, at almost 2,200 days, about two months away from overtaking the 1974-1980 run as the third-longest since 1929. The Chicago Board Options Exchange Volatility Index, a gauge of costs for S&P 500 options, has jumped 20 percent this month. Still, at 16, the VIX is 20 percent below its average since the inception.